skip to main | skip to sidebar

Thinking through Hullness by David Atkinson

What is hullness?
That's what we want to know!
Some months ago Hull City Council presented future plans for the city. The response was..."this could be anywhere. Where's the hullness"?
So what do you think hullness is?
Arc wants to know about the buildings and places in Hull that you think are unique. These are the reasons why new developers shaping our city should create great places with outstanding architecture.
We think Hull has loads of that already and deserves more, instead of bland buildings and public spaces that could exist anywhere.
Have your say. Click on comments at the bottom of the posts (says "0 comments" if you're the first). And send us your thoughts, photographs and artwork.
To kick off the hullness debate we asked an architect, a historian and a pair of psycho-geographers (keep reading) to explain and discuss their thoughts on the subject. Their work was presented at Arc on the 24th of June 2009. We took the debate to a wider audience with our Arc exhibition stand that made an appearance at many of the summer festivals and events in the city. Our second formal debate was on Thursday 10th December, 6.30 - 7.30pm at Arc. We are planning further events and also an exhibition, so watch this space! 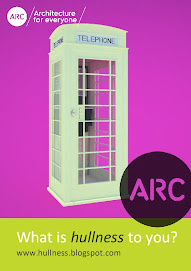